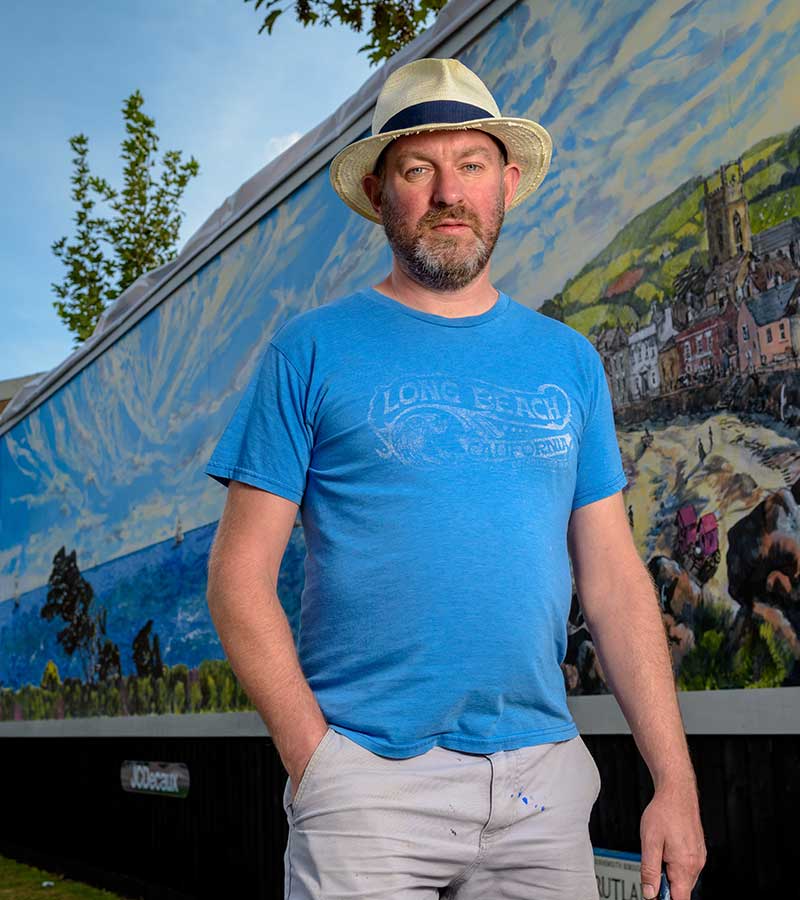 David Downes is a brilliant landscape painter who amplifies the sense of place and time through the lens of autism. David completed a MA at the Royal College of Art in Communication Design in 1996. He won his first major contract in 1999, a commission by the BBC to record the Corporation’s most important architecture at the turn of the century. In 2012, David was commissioned by the Savoy hotel to paint the Thames Diamond Jubilee Pageant from the Roof of the Savoy which can be seen in the entrance hall of the hotel. In his most recent commission, David will be filmed painting a giant interpretation of Sanditon, the Jane Austen’s fictious seaside town for ITV.

David was diagnosed with high functioning autism at the age of 32. He is an active supporter of the National Autistic Society and was made a Vice President of the Society in 2012. David regularly speaks on behalf of the charity and paints live at fundraising events. David lives and works in Manningtree Essex with his partner Rachel, their daughter Talia and dog Winston. He recently returned from California where he was working for three years.

Click here for the full biography of David Downes.

“My work focuses on the juxtaposition of history and modernity in London, graveyards lie next to modern offices, aging churches stand in built up areas. I often paint my scenes of London from an aerial position, imagining the way the landscape would look when viewed from that angle. In this way my work is a meeting of realism and imagination. I am very focussed and can capture architecture and urban-scapes in vivid detail”
David Downes
“A visionary outsider, Downes’ no-nonsense punchy panoramas offer more than traditional picturesque scenic geography; they are Hitchcockian. His art is my safe comfortable go-to place from where to contemplate today’s world. To explore and survey the challenging impact it has on each and every one of us.”
Estelle Lovatt, FRSA
David Downes “I gave David the near impossible task to record for posterity a sense of the scale and majesty of some of the BBC’s finest buildings. David is adding a new dimension to the BBC’s heritage and building up our collection for the future.”
The late Justin Philips, Head of Heritage for the BBC
“The full extent of David Downes’ achievement as a mature professional remains to be seen. He has studied alongside the most able of art students and in the footsteps of the eminent: Henry Moore, David Hockney and other who achieved international status during their lifetimes. Whatever his ultimate achievement, it cannot now be insignificant and in the light of his history, it is already remarkable.”
‘Artists Emerging: Sustaining Expression Through Drawing’, Sheila Paine, Ashgate, 2000
“The Savoy has enjoyed a long history of playing host to artists and commissioning artwork and we are delighted to have continued this tradition by working with David Downes to create a wonderful record of the historic Thames Diamond Jubilee Pageant. This painting will hang in a prominent position in our Front Hall where it will be enjoyed by guests for many years to come.”
Kiaran MacDonald, Managing Director of The Savoy
“We wanted to celebrate the launch of Sanditon with a really special piece of marketing, and when we saw David’s work we knew he would do a brilliant job of bringing the story of a nascent seaside town to life in an artwork and capturing the romance and joy of the series. We can’t wait to see what he creates over his ﬁve days of painting and to have a completely unique poster at the end of the project.”
ITV